Selection of paintings and exhibitions⇊: 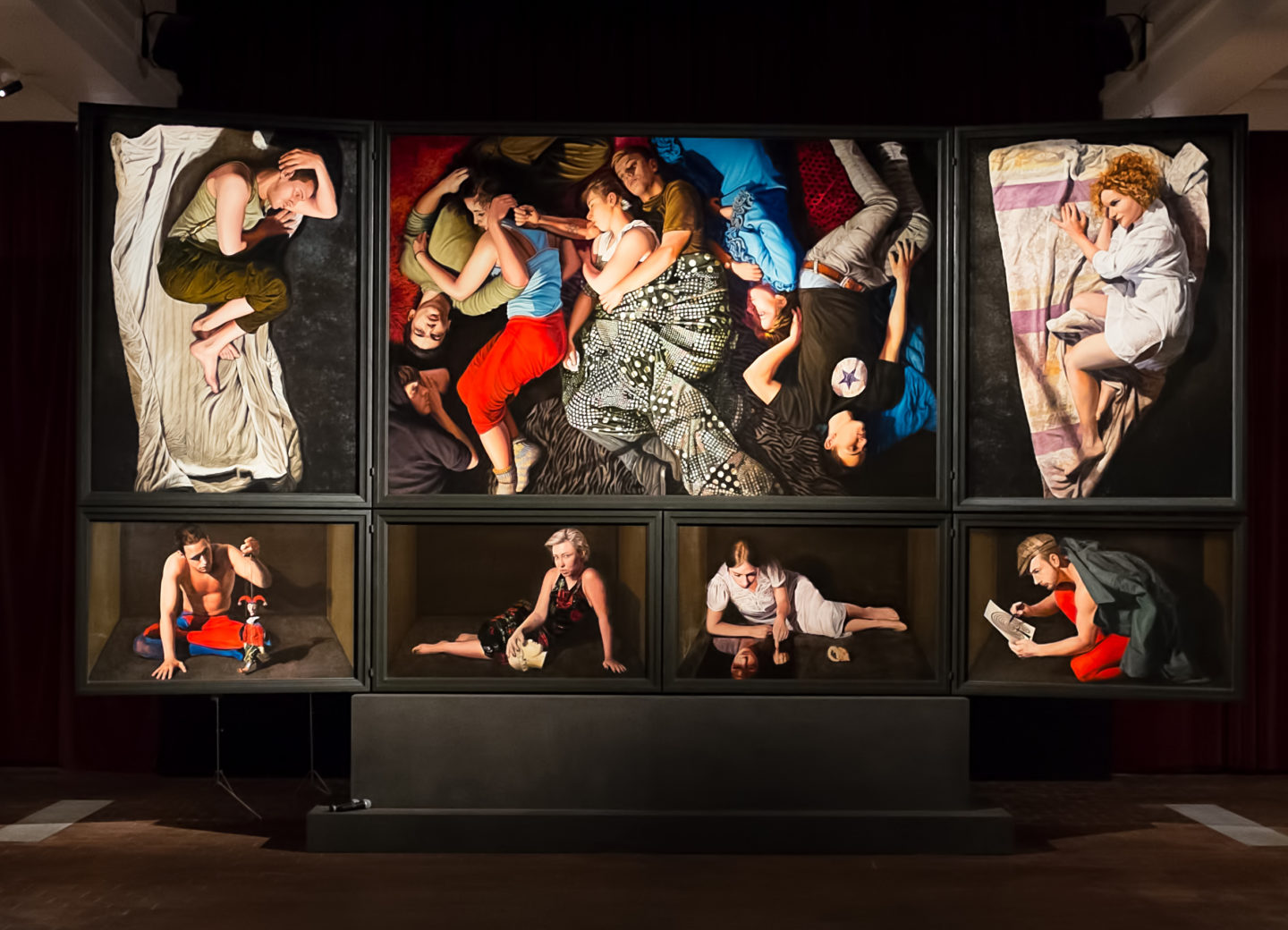 Dimitris Tzamouranis is a painter in the classic sense of the word. His representational paintings are testament to his outstanding artisanal abilities. He paints on large-format canvases, which he primes traditionally in multiple layers, or on copper plates in small formats. His world of motifs also follows the traces of art history back through many past centuries. Nevertheless, his art is exceptionally contemporary, blending the present with traditional content, techniques, and themes. Tzamouranis is as interested in current social and political topics as he is in interpersonal encounters and individual dispositions.

Born in 1967 in Kalamata on the Peloponnese peninsula, he moved to Berlin in 1990 at the age of 23, having graduated from the Fine Arts University in Thessaloniki where he majored in painting and graphic arts. For the next three years, he studied at the Berlin University of the Arts. Video soon became the central medium for him. He lived for a year in Istanbul thanks to a scholarship awarded by the Senate of Berlin. Drawing on his experience in the bustling metropolis, oscillating between modernity and tradition, the East and the West, he shot Die Flut (52 min.) in 1999. In Berlin in 2001, he shot Selbstschnitt, ein Portrait von Wolfgang Harth (Self-cut: A Portrait of Wolfgang Harth, 9 min.) in which a doctor operates on himself.

Tzamouranis’ grandfather was a church painter, and the artist was brought up in a very religious family. These two facts from his life, combined with the artist’s education, ultimately pushed him towards figurative painting. Since around 2001, he has painted very personal works using a realistic visual language. He soon ventured beyond pure imagery and introduced mysterious elements and characters into his painted scenes. Reality and dreams subtly intertwine, visualisations of the paintings seem magical, and illumination, light, and shadow add a film-like dramatic effect. A principle he continued to pursue until today in repeatedly new variations and narratives. His numerous studies of characters, portraits, and self-portraits contain an exceptional closeness and intimacy. In this slightly surreal or paradoxical depiction, the artist captures deep human fears and central themes of our lives: love, longing, hope, pain, and the search for meaning. Tzamouranis is particularly interested in the non-verbal communication between the main characters, with their encounter sometimes performed in silent motionlessness, and at other times with solemn energy.

Tzamouranis always works with models, both young and old, and often people that he is close with. With their help, he tests the constellations of several figures and specific positions to then transfer them into his works. Apart from his own imagination and the scenes he discovers through theatrical directing, he is inspired by themes from the history of art. He introduces historical, mythological, and biblical concepts, often only partially, into the present, creating an irritating yet fascinating blend of modernity and imagery that has been passed on throughout the centuries. The clothes and hairstyles of his models suggest they are people from the twenty-first century. Their poses, which we have recorded in our collective memory thanks to history’s most famous works of art, often seem strangely remote and incomprehensible in the context of a contemporary environment. Again and again, the artist creates coherent works. He has recently worked with young people taking vocational training.

Scroll back to top